One year ago today, E came through me into the world. I still can’t quite believe it, when I look at her now, that she grew inside my body. It’s not particularly cool, and even inappropriate to talk about birth in polite company, but I’m here to tell you, it blew my mind and still blows my mind. It changed me and continues to change me and it’s the craziest, most cosmic, most vivid thing that has ever happened to me.

In my opinion, there is no more compelling evidence of the cultural power of men than the silence and shame that surrounds pregnancy and childbirth. If men grew humans and then labored them into the world, the details and challenges and glories of this experience would be spoken about constantly. Politicians would reference their labors in speeches. Fifty percent of movie plot lines would involve pregnancy. Novels, operas, frescoes, and poems would feature the cries of the laboring man, the moment of crowning, the placenta, the milk. Birth analogies would replace war analogies in the language of struggle. Instead of “battle scars,” they’d be called “stretch marks.” And boy, would there be paid maternity leave. For, like, six months or better yet, a year.

Instead, birth is the Bermuda triangle of cultural production. No one goes there, no one returns from there. Death, sex, money, love, politics, fashion, weather, crime, divorce, architecture, genius, religion, music, dance, botany, food: these things sell books. People write hit songs about these things. Movies about such topics are well reviewed. Placentas: not so much. At this point, women are just as guilty as men in perpetuating this reality. We have jobs, we make money, we have market share and the vote: it’s time for us to start talking about what it’s like to push small humans through our vaginas! Not to mention what it’s like to care for them and raise them.

I intended to continue by writing the story of E’s birth, but everything I write feels too raw and too private, and perhaps this is in part why birth remains unspoken. Suffice it to say the following: When I was pushing E out of my body I felt certain that I would be split in two and that I would die and I consciously accepted death so that E could be born. Thus, though I doubt many things, the fierce nature of my motherhood is not one of them. This is one of the gifts that birth can give a mother, the knowledge that she is capable of staring down death to protect her child.

In the course of being pregnant, giving birth, and raising a child through her first year, I have become a less well-put-together, kinder, less appropriate, more open, less perfectionistic, more efficient, less guarded, more focused person. My compass points in only one direction and that is E’s direction. Here are a few of the things I have learned:

1) We have almost no control over anything. You can research strollers all you like and put a big lever arm over your toilet seat to prevent drowning, but the gauntlet of prenatal development, birth, and illness is outside of our control. You love your child so much that the thought of their death is enough to evacuate the spaces in your body that are supposed to contain air, but still the possibility exists. For me, this has made me softer with everyone. Some of us will have to live through this impossible possibility. Let’s all be grateful and kind to one another! Also, the fact that I have no control over anything has made me less anxious about controlling everything, but more anxious about ensuring that I am paying attention at all times. If I can’t control things, I might as well try to catch them early!

2) The body is shared. We share a body with our mothers, then we share a body with our children. We inherit energy from the sun through the plants we eat, we eat the eggs of other animals, we eat other animals. We drink the milk of cows, we lactate and feed our pumped milk to our babies. We are all of us mortal bodies and will die. I used to have a lot of critique of my body, and it would be a lie to say that now, with it’s stretch marks and saggy sections, that I don’t have my share of self-loathing thoughts. But giving birth made me realize that this body is not for looking at. It’s for living through and for sharing with others in ways that are life giving and life sustaining. This body is part of a network of bodies that spans time and space. It’s not for me to hate this body that so many other bodies have contributed to making. (None of which is meant to diminish a woman’s right to choose. Raising a child has made me more pro-choice than ever. This shit is hard! No one should be raising children who doesn’t want to be raising them.)

3) There is no possibility of perfection in this life. This is a great relief. Having a child sweeps you into time. There is no time to plan and then execute anymore. You are in pure execution mode. This means that at times you are feeding your child a well-rounded meal including broccoli and free-range chicken and at times you are feeding them boxed macaroni and cheese. Likewise, at times you are at the top of your game at work and at times you are exhausted and cotton-brained but you still show up and do your best and rely on your team mates to help you. Before I had a baby I feared mistakes, I feared others seeing me in a vulnerable state. Then suddenly I was pushing a baby through my vagina in front of ten strangers and then needing the help of strangers to go to the bathroom afterwards and then calling the pediatrician’s after hours line in the middle of the night for one tiny worry or another despite the fact that I am myself a pediatrician and I realized: I am not perfect and I need help. Things have gotten better in many ways as a result.

4) Parental love astounds me with its force. I go to work day after day after day after day on almost no sleep and endure dehumanization at the hands of the medical training system so that I can continue to make money and provide for E’s needs, so that one day I can get a job that makes more money, so that my child will have security and piano lessons and a world of possibilities. The single thought of E keeps me oriented to my responsibilities at all times. How do I know I will keep going no matter what? I know this because I am E’s mother, because I pushed her into the world.

Here are some pictures of E in her first days, and then today. It’s hard to get a great picture of her these days, because she is never at rest unless she’s asleep. She is exploring the world around her at all times, and this requires motion. But I managed to catch her in a series of moments of being completely herself. I am so grateful to be her mother. 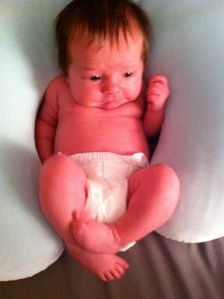 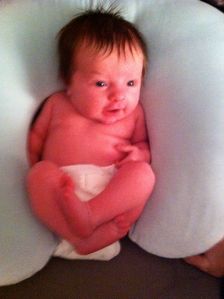 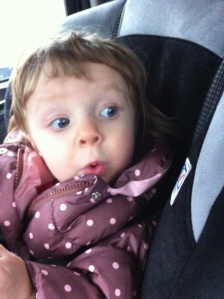 One thought on “Happy Birth Day”

I am a woman with many jobs: mother, partner, daughter, pediatrician, writer, friend, financial disaster management specialist (graduate school loans x2 over here) -- the list is long. I'm trying to do a good job at all these jobs. As a result, life is equal parts love story, learning curve, and that scene from the Cat in the Hat just before everything comes crashing down. Which is to say: messy. Which is to say: fun. Along the way I am trying to keep up with some other loves: traveling, poems, art, real estate and interior design (lord, let heaven be just like dwell magazine), self-improvement strategies (let my tombstone read: "She did the best she could"), and the life of the mind (mine and other people's). Most days, I feel so lucky all I can do is grin and worry that something bad will happen. The other days, I wonder: Why don't babies come with maids? I'm glad to be here and I hope you are too!